Benji Kemp was a doctor living in Lion City. A regular at Stella's Bar, he later joined Raymond Atwood and his group in entering Torcia Tower, wanting to study the Pot of Basuzu.

Born to a wealthy family descended from the original architect of Torcia Tower,[1] Benji eventually became a doctor, setting up a hospital in Lion City. Around this time, he also became a regular at Stella's Bar, befriending the owner Stella Townsend and never paying his tab. Later on, Stella brought in a new patient for Benji at his hospital, the thief Lloyd Lowell, who had escaped Torcia Tower and was found unconscious by Stella. There, Benji treated him.[2]

He also, at some point, befriended the street performer Raymond Atwood. Upon Raymond's recommendation, Benji started attending to the Chamberlain family to clear his bar tab. After settling their affairs, Benji was approached by Raymond, who revealed that he was searching for the Chamberlain daughter, Cynthia, at Torcia Tower. Alarmed,[3] Benji explained how he knew about Torcia Tower's design due to its architect being his ancestor.[1]

Benji thus joined Raymond as he went to the tower, also bringing along Lloyd, who had recovered. He and Lloyd waited outside as Raymond, posing as hired help for the politician Joshua Herbert and fake sorceress Vivian, entered the tower to confirm its layout and the powers of the three torturer sisters. Soon after, they met with Raymond after he escaped, his mission successful.[4]

The three prepared to return to Torcia Tower, with Benji supplying plans from his ancestor and designing acid bullets for Lloyd to use. A week since Raymond entered, the three returned to the tower, also bringing along Stella. Waiting on the first floor with Stella as Raymond and Lloyd went upstairs, Benji discussed their reasons for going there, him wanting to obtain and study the Pot of Basuzu.

Encountering Gibbet, the two were soon after captured by Gibbet and brought to the fourth floor. He then witnessed one of the sisters, Maiden, kill Lloyd with an iron maiden. As Gibbet left to deal with Raymond, Benji and Stella were later released from their bonds due to Gibbet being knocked unconscious.

With the ceiling above them collapsing, Benji, Stella and the wounded Raymond escaped to the first floor, pursued by Rack, who was transformed into a giant wolf. Consumed by his curiosity again, Benji puzzled aloud over how they saw Gibbet was bleeding despite her supposedly being a wraith.[1]

Following the incident, Benji looked up Lloyd's family for Stella. Becoming obsessed with Torcia Tower, Benji continued going to Stella's Bar, sharing how he and his friends planned on breaking in again.[5] Roughly half a year later, Benji sent a letter to Raymond that detailed how the sisters had become active again, requesting that Raymond stop by if he planned to infiltrate the tower again.[6] 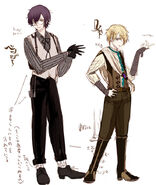 Concept art of Benji and Lloyd

Benji with Lloyd and Raymond
Add a photo to this gallery

Benji with Stella in the novel

Benji and the group inside Torcia Tower

Retrieved from "https://tower-of-torture.fandom.com/wiki/Benji_Kemp?oldid=7324"
Community content is available under CC-BY-SA unless otherwise noted.