Hargain Crossrosier was the leader of the Crossrosier Sorcerer Society. After discovering the Ending Records as an archaeologist, he devoted his life to researching them, eventually losing his first wife Thyful in an experiment. To atone for this, he created Tsukumo and loaned her out to the wraith Romalius to obtain the Ending Records of another wraith, Beritoad.

Hargain was an archaeologist who, at the age of twenty-one, discovered the Ending Records, ancient documents that, upon his studying, showed how to perform magic. Wanting to create magic in the modern era, Hargain was mocked for his research, supported only by his wife and fellow archaeologist Thyful. He and Thyful researched the Ending Records for a decade in a secluded cottage.

During his experiments, Hargain used Thyful as a test subject, resulting in her death and him becoming a sorcerer. Soon after, he disappeared from the public eye, abandoning the son he had with Thyful.[1]

During what would later be known as the Battle of Cave Horaga, Hargain showed up and cast rain magic, quelling the forest fire resulting from Beritoad's lightning magic. He then joined the royal commanders Hank Fieron and Romalius in going after Beritoad alone. He later ended up being targeted by Hank and Beritoad, regarded as a threat due to having survived the battle.[2] Following Romalius' defeat of Beritoad, Hargain obtained Beritoad's Ending Records.[3]

At some point, Hargain moved into Hank's old residence, a mansion at the Royal Capital.[4] He also married three different women in succession, having a child with each of them who died young before they left him under varying circumstances. Hargain then experimented on the corpses of his children and attempted to perform necromancy on them to atone for accidentally killing Thyful.[1]

As he was experimenting on the child he had with his fourth wife, Tsukumo, he was visited in his lab by Romalius, who spoke to him about the death of his disciple Vivian and Beritoad becoming active again. Refusing to get involved on account of his old age, Hargain listened as Romalius offered him half of his own Ending Records and claimed that Beritoad had stolen the other half. Convinced to help, Hargain agreed, with Romalius also loaning out his adoptive son Raymond Atwood to work as Hargain's assistant.

After Romalius left, Hargain made arrangements for Raymond to stay at the mansion. Two weeks later, Hargain found Raymond sneaking into his lab and angrily asked him to leave; as Raymond did, Tsukumo suddenly broke out of her tube and imprinted on Raymond, calling him her father.[3] Although displeased with the development, Hargain nonetheless sent Tsukumo and Raymond to Torcia Tower to capture Beritoad, also sending his servant Liam Highland along in order to ensure that Raymond didn't abandon Tsukumo. As part of this, he also had Liam bring a bracelet he invented,[5] in order to remotely transmit his magical power to Tsukumo.[1]

With the mission successful, Hargain placed Beritoad in a tube in his lab. After fruitlessly interrogating him about the Ending Records in his possession, he then vivisected Beritoad to study his alchemy powers.[4] When Beritoad's underlings came to the mansion to rescue him, Hargain remained in his lab during the ensuing battle, continuing to transmit his power to Tsukumo. Eventually, his body gave out from overexerting his powers; as he died, Hargain prayed to be reborn.[6]

Hargain in the novel
Add a photo to this gallery 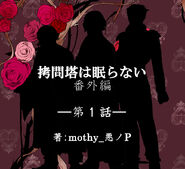 Hargain's silhouette on the image for "Torture Tower Doesn't Sleep: Extra Chapter"
Add a photo to this gallery

Retrieved from "https://tower-of-torture.fandom.com/wiki/Hargain_Crossrosier?oldid=7409"
Community content is available under CC-BY-SA unless otherwise noted.