"You mean to call me coldhearted? I know I am. But this world isn’t so kind that you can make it by idealism alone."
―Raymond Atwood[src]

Raymond Atwood was the son of Beritoad and Selma, as well as the adoptive son of Romalius. Left an orphan after the death of his mother, Raymond eventually became a wraith hunter, taken in by Romalius.

Born the son of Selma Atwood and the wraith Beritoad, Raymond was raised by his mother in Melby Village.[1] After Selma was burned at the stake for loving a wraith, Raymond was picked up by a circus troupe. Later on, he was adopted by Romalius. When he was around ten years old, he killed Beritoad's servant Hank Fieron while he was sailing to the Royal Capital.[2] Upon killing the wraith Stolasphia, she released a gem which trapped him inside it for fifteen years before he finally escaped.[3]

Eventually, Romalius sent Raymond on a mission to capture Beritoad. Raymond went along with the plan, although secretly planning to kill Beritoad in order to avenge his mother.[2] As part of this, he began staying at Lion City,[4] getting involved with the lives of its citizens.[5]

When Raymond was hired by the politician Joshua Herbert and fake sorceress Vivian to assist them as they entered Torcia Tower, he used the opportunity to confirm its layout and the torturer sisters' powers. After his companions were killed, he revealed himself and his powers to Gibbet, Rack and Maiden, doing battle with them before fleeing.[6] A week after, he returned to the tower with the thief Lloyd Lowell, the doctor Benji Kemp, and the bar owner Stella Townsend, determined to kill Beritoad once and for all.

Making his way up to the chapel on the fifth floor, Raymond confronted his father and stated his reasons for coming there, also doing battle with Rack. After Rack transformed into a giant wolf, Raymond escaped along with Benji and Stella, Lloyd having been killed by Maiden.[2] Raymond then returned to Romalius' castle and reported the incident to him.[7]

Concept art of a younger Raymond and Liam

Additional concepts of his lantern, knife, belt, and collar

Raymond and Gibbet on his mother's concept art

Raymond among concepts of the sisters' torture devices

Raymond concepts for the cover of Clown Chapter

Raymond in a concept for a Clown Chapter promo

Raymond with Benji and Lloyd in Torture Tower Doesn't Sleep 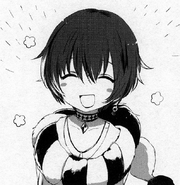 Raymond followed by a masked Lloyd

Raymond meeting Tsukumo in the novel

Raymond with Tsukumo in Stella's bar

Raymond defending Tsukumo from Rabiah under the artist's note 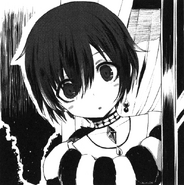 Raymond in the novel

Raymond and company meeting with Rabiah 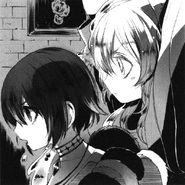 Raymond facing a monstrous Rack
Add a photo to this gallery

Raymond and Lloyd on the inner cover

Raymond and Lloyd in the manga

Raymond in a promotion for Clown Chapter

Raymond on another promotion for Clown Chapter

Raymond in a character slide promotion 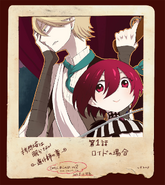 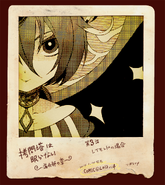 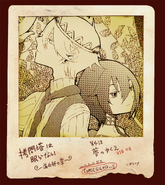 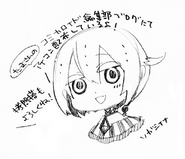 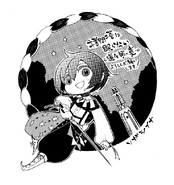 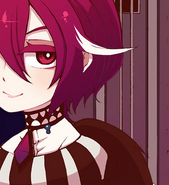 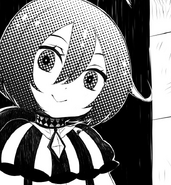 Retrieved from "https://tower-of-torture.fandom.com/wiki/Raymond_Atwood?oldid=7604"
Community content is available under CC-BY-SA unless otherwise noted.