Vivian was a fake sorceress who visited to Torcia Tower with Joshua Herbert and Raymond Atwood in order to obtain the Pot of Basuzu.

As a low-level member of Crossrosier, Vivian was brainwashed into believing her prestidigitation was real magic. At one point, she learned about Lord Hank Fieron, who sold his soul to the wraith Beritoad, and that his "daughters" were continuing his legacy of torturing victims as sacrifices. When the politician Joshua Herbert approached her for assistance in discreetly dealing with the people going missing in Torcia Tower, Vivian agreed in exchange for receiving the Pot of Basuzu from the tower. The two then hired Raymond Atwood for assistance.

Upon entering the tower three days later, Vivian used her crystal ball to ascertain the locations of the three inhabitants and gave Raymond and Joshua protective talismans. The two ascended to the second floor and encountered Gibbet, Vivian using her crystal ball to unleash an attack upon the girl. As she did, she was killed by one of Maiden's Iron Maidens.[1] 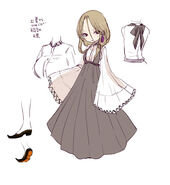 Vivian and Joshua in front of Torcia Tower

Vivian casting magic
Add a photo to this gallery

Vivian in a character slide promotion 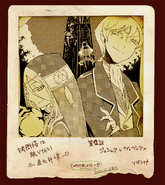 Sketch compilation
Add a photo to this gallery

Retrieved from "https://tower-of-torture.fandom.com/wiki/Vivian?oldid=7290"
Community content is available under CC-BY-SA unless otherwise noted.